There’s a lot of great things happening to keep sport safe, fair and inclusive. The annual Play by the Rules Award provides a snapshot of what issues are a priority for sports and gives us an insight into the approaches being taken by organisations across the country.

The Award recognises clubs and associations that are making a significant contribution to keeping sport safe, fair and inclusive. The Award has been running for two years now and over that time we’ve received 114 nominations with 105 different initiatives highlighted. These were spread across 25 sports with the most nominations coming from Rugby League and Football. The inaugural winner was Gymnastics Victoria for their work with Special Olympics to create a pathways program for young people with disability. This years winner was the GingerCloud Foundation for the development of their Modified Rugby Program. Although there can only be one winner, it’s fair to say that there were many nominations worthy of recognition.

It’s interesting to look at the range of initiatives being undertaken. This gives us a snapshot of what is being done and the priorities for sports clubs and associations. It also provides a wealth of information, resources and strategies we can share and copy across sports.

Of the 105 programs highlighted, 36% of focused on disability inclusion. There is some outstanding work being done by many organisations who recognise the inherent disadvantages people with disability face in accessing sport. Organisations such as Belgravia Leisure, Coolbinia Junior Football Club, Bowls WA, AAA Sports Ballarat and Townsville City Netball Association are examples of best practice in this work. Disability inclusion was by far the highest priority with the second priority focus area being governance issues with 16%.

Governance largely involved the development of various policies, codes and guidelines for sport exemplified by the work at all levels of sport by organisations such as Maccabi Australia, Hockey NSW, Tennis Queensland and Woodsport Netball Club. There’s a growing recognition of the importance of good governance, as Hockey NSW said in their nomination:

Possibly on the back of the Royal Commission into Institutional Responses to Child Sexual Abuse and the widespread media coverage around chid safety, the other growing area of focus was child safety with 12% of nominations highlighting initiatives in this area. This work tends to be done at national and state association level, for example, through the excellent work of Tennis Australia and vicsport. However, there are examples of best practice directly at community level through programs developed by Palmeston Regional Basketball Association, Toowoon Bay Surf Life Saving Club and Southern Vales Archery Club.

A breakdown of all nomination focus areas: 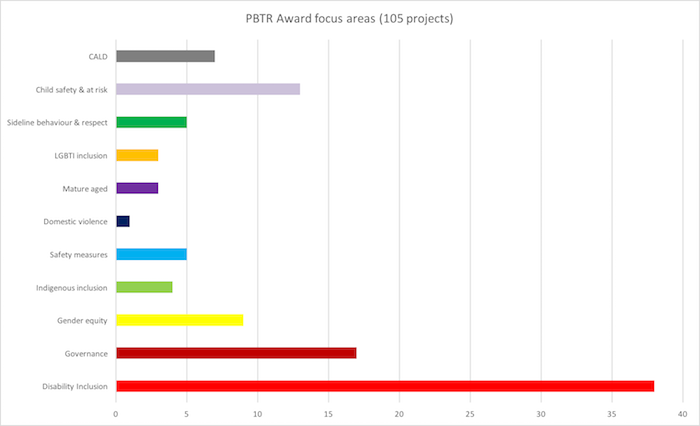 There are, of course, many individual examples of organisations that have developed very bespoke, individualised programs designed to address a specific need in their sport or local community.

An outstanding example of work creating systemic change is DPV Health and their Respect: Join the Club project. This project aimed to change sexist and masculine-dominated elements of the game’s culture, ensuring it is respectful and inclusive of women, allowing girls and women to take leadership roles at different levels. At a more local level Blacktown City Netball Association are tackling serious issues of domestic violence through their innovative Stand Up, Speak Out and Act against domestic violence Netball weekend and carnival initiative.

Several organisations demonstrated a commitment to sideline behaviour and respect in their nomination. Again, this goes across different levels of sport, for example, the Newcastle Junior Rugby League Association, the NSW Office of Sport, Diamond Valley Basketball Association and South Metro Junior Football League have all developed approaches to encourage respect and good behaviour.

One of the most impressive aspects of reading through the nominations each year is simply seeing organisations doing their core business really well. There’s a lot that can be learnt from the work of organisations such as Inclusive Sport SA, vicsport, Reclink, Disability Sport and Recreation, Inclusion Solutions, Proud 2 Play and NSW Office of the Children’s Guardian.

You can learn more about the work of these organisations and other nominees in our Case Studies section. We will be adding to this growing library of best practice so bookmark this page for future reference and share with friends in sport.

Well done and congratulations to all the Play by the Rules nominees and keep up the great work.